They say about 10% of the population are assholes.

You know the ones who chuck McDonald’s wrappers out of their suburban. At the lights. In front of the kids.

The one who rides the right lane until it ends and then signals and cuts you off at the last minute, even though you patiently merged 2 miles ago…

The one who bullies the soccer coach into making their kid captain even though “goal” is a word the kid can’t spell never mind produce.

But I’d say the pandemic has revealed more assholes or at least asshole behavior than a mere 10% of the population.

That’s the trouble with a global plague – uncertainty, rapid and never-ending change, and the 24-hour doom news cycle it can bring out the asshole in anyone.

I agree that uncertainty makes humans anxiety machines as our fear centres go haywire on their desire for “the Known” AKA the comfort zone.

But, I’ve also seen a lot of asshole behavior from “spiritual” people during this last 18 months that makes me not only question the 10% rule, but also the deeper shadow in the spiritual community especially as it comes to personal expression, sexuality and money…but that is a topic for another day.

During this past year, I experienced “friends” and “team members” resort to the kind of mafioso behavior that would make Tony Soprano proud including fraud, lies, manipulation and theft – all with a namaste swirl at the end.

People I had known for 10 or more years…

People I had mentored and given ample support, opportunity and a ton of time…

People who said they loved me and the community I created…

Now before this comes off as a self-pitying rant, let me say that it is not.

And before some spiritually immature know-it-all, starts using words like “karma” or “Law of Attraction”, let’s just own the fact that people are assholes, especially when they have not done the work to transcend their own fear about money or change or their own personal power and where it really comes from…

And yes, even if they can translate adho mukha svanasana into downward dog, they too can be assholes…

So, whether it’s your so-called team members who try to defraud you or the soccer mom who tries to steamroll you, the question becomes:

“What do we do with assholes?”

Most people would tell you to forgive assholes…To send them love and light. I say fuck that.

I say make it NOT matter.

It just does not matter.

Now this is some major ninja self-mastery stuff, and likely not something you are going to hear from Instagram gurus so stay with me.

Feel the pain, the anguish, the revenge fantasies AND then just make it not matter.

This is a choice.

You just make it not matter.

To me, the need for forgiveness means I am still making this matter, a lot. I am not saying NOT to forgive, I am saying make it not matter.

The more we nurture those feelings of rage, victimization and frustration, the more of an asshole we become AND worse off, we actually can’t see the open lanes, the opportunities and the real friends in our life.

We get stuck in a cycle. We keep the hurt going, sometimes for decades. We get sick in mind, body and spirit…

We can attempt to forgive, but really, we just need to make it not matter.

I am not saying that your pain doesn’t matter, or those bitter moments in life aren’t real.

I am saying that each of us has a choice.

If we truly believe all the Goddess/ Divine Feminine stuff we say we do, then we also have to believe that we are powerful creators who can overcome anything IF we choose (and with the right tools).

Here are some questions to help you jump into a new portal of peace:

And if you want to take this self-mastery, embodied Divine Feminine, and walk-the-talk ninja stuff to new levels of personal peace and confidence as well as amplified wealth and success, and find the ways to tell delusional soccer moms where to go with real poise and effect, consider The Embodied Mastery training and certification.

Find out if this applies to you now.

It’s time to make the assholes NOT matter, and your “tastes”, wants and peace the only thing that really matters in your life.

You are a fucking Goddess!

Those were the painful but honest words coming out of my mouth.

It was not easy to admit that, not only because I don’t like that side of myself, but because I am one who teaches forgiveness to men and women.

But I am humble enough to admit when I am having trouble and willing to do the “work”.

So, I really took a look at what the fuck was going on, and I discovered it was a “protection” measure that I had developed as a small girl.

I was unconsciously holding onto an aspect of the Imbalanced Feminine.

These “imbalances” can be so subtle and insidious, and we often don’t know they are at play until our results, relationships or circumstances are going off the rails!!

In a culture that is totally out of balance when it comes to the Feminine, imbalances can be easy to fall into and actually seem “normal”.

But they wreak total havoc on your life, and your relationships.

It doesn’t matter if you are man or woman, the Imbalanced Feminine shows up in both genders.  In fact, I have seen it in men as the overly “Nice Guy” or “People Pleaser” who has few boundaries.

The good news is that I had enough awareness (and support from my husband, and also my mentor) to call this out and embrace the Balanced Feminine, and just let that shit go!

There is no shame in any of this…In fact, shame is a great reason to stay stuck, in hiding and in denial.

Check out the Imbalanced and Balanced Feminine chart below. 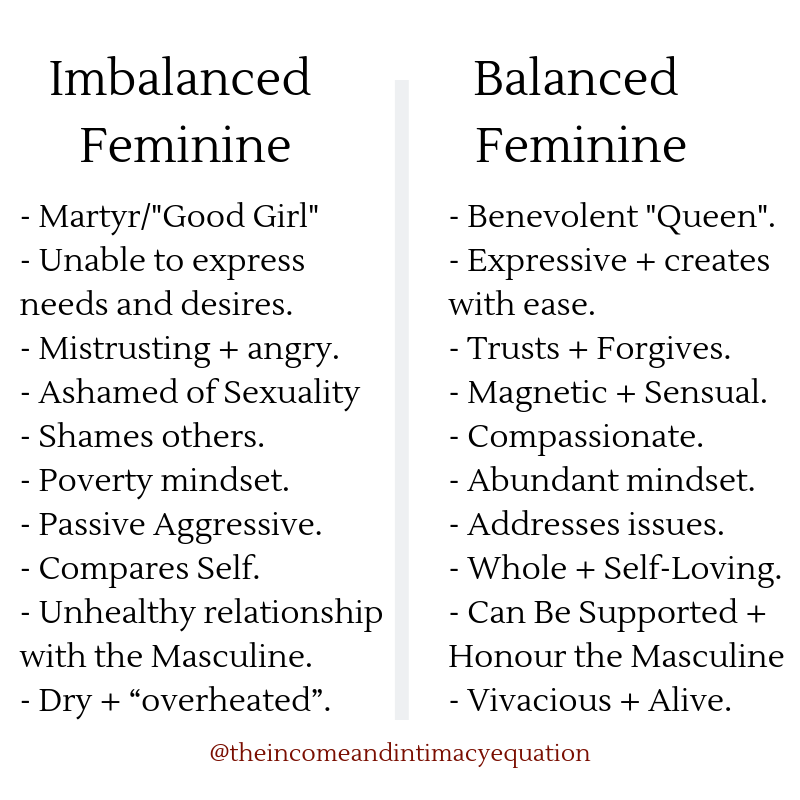 Where are your imbalances?

Where are you feeling balanced?

What would you add?

Get more of our honest relationship, business and intimacy advice at @theincomeandintimacyequation on Instagram.

The Masculine is coming next week…Stay tuned.

Please forward to a man or woman who may be intrigued by this chart too. 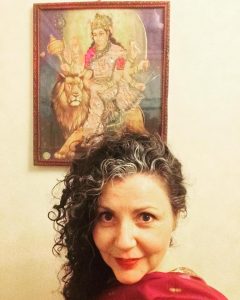 P.S.If you want help in creating “balance” in your life and business, then reach out today https://shastatownsend.com/apply/. You can’t do it alone or you would have already.

P.P.S. Ian and I are taking a SMALL number of one-on-one clients in 2019 who wish to create amazing results, accelerate their income and make a bigger impact by truly claiming their power as women or men. Reach out to find out of that is for you at https://shastatownsend.com/apply/

This error message is only visible to WordPress admins